The lunar eclipse on January 31, 2018
was the first to coincide with a Blue Moon
– a second full moon in one month –
in North America in over 150 years.

Why does the moon turn red?

The Moon does not have any light of its own—it shines because its surface reflects sunlight. During a total lunar eclipse, the Earth moves between the Sun and the Moon and cuts off the Moon’s light supply. When this happens, the surface of the Moon takes on a reddish glow instead of going completely dark. (timeanddate.com)

The View From My Part of Texas

I don’t own professional nighttime moon photography equipment; so I did the best with what I do own.  These photos were taken with my Canon 80D and a Canon EF-S 55-250mm lens.

I took this one as we were leaving early Monday morning.
The moon was still high in the sky at 6:25 Am.

We drove to the top of a hill in the country &
by 6:47 AM we began to see a little color
as just a sliver of the moon was showing. 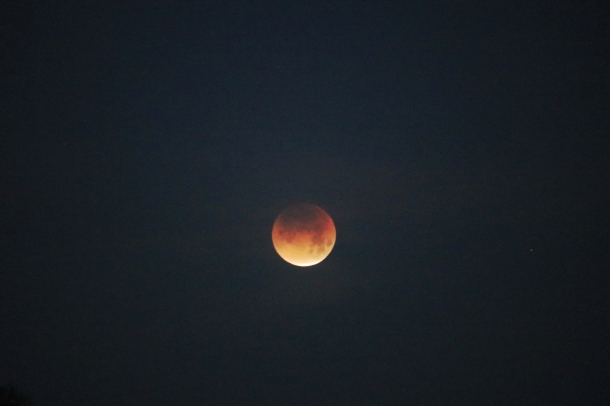 As the sun is rising,
the moon begins to fade into the sky at 7:00 AM.

We were at the top of a hill with trees in the distance; so we quickly lost sight of the moon as it went below the horizon.  We drove a bit to see if we could still find it; but it was lost to our eyes.

What did  the Super Blue Blood Moon Eclipse look like from your spot in the world?