I love my grandsons.  They are the light of my life (and all those other sweet sayings).  That being said, spending time with the 3 of them is joyful and just a little stressful.  Reality is usually a little more rambunctious and louder than I prefer; but I relish my roll as Grams.  I want to hug, kiss and spoil them every minute that I can.

The 7-year-old surprises me everyday with things that he does. — like putting together a complicated Lego vehicle that is for ages 9 & above.  He is sweet and loving except when he’s not; luckily, the not times are much less than the sweet and loving times.  He has a big heart and is still learning to deal with the emotions that brings.  A classmate told him that Santa wasn’t real and he was so worried about Christmas.  Luckily, Santa left him a note and Christmas went off without a problem.

The 6-year-old amazes me as he learns to read and do math.  He’s been so ready to learn and was so excited to get to go to school this year.  He’s a little shy and quiet until he’s sure of his surroundings.   He watches and learns from everything going on around him.  Often, he doesn’t try something until he sees if the others get in trouble first.  This Christmas he was quick to figure out that some of the presents were shaped the same as his brothers.  He thought he had it all figured out; and was excited to get presents that he didn’t expect. 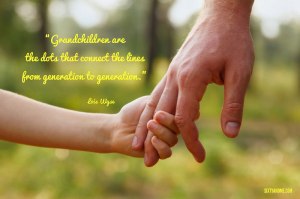 And it’s so much fun watching the 2- 1/2 year-old’s personality develop more each day.  It seems that he went from being a baby to being a toddler in one day.  He says things everyday that surprises me.  He loves to pretend to be a scary monster and then give a surprise kiss on the cheek.  On Christmas Day, he said, “Look it’s a box.” about many of the presents he opened.  Then, it became, “Look it’s another box.” said with the same enthusiasm.  It seemed he got two presents from every present — the box and the actual present.  He also had to stop and try on every shirt that he received.  It was so sweet to watch him be so excited about everything.

Sometimes being a Gram is harder than you think…

We’ve loved spending this week with the three of them.  Since we were also watching them while dad was at work; we had to take on the roll of baby-sitter also.  This meant dishing out discipline in some instances.  My method of discipline is different from Pops, their Aunt and even their Dad.  Pops usually just has to get stern with them and they will behave.  He doesn’t say much about their behavior; so when Pops says “Boys, stop running in the house.”  They stop.  Their Aunt doesn’t put up with nonsense and they understand that.  They’ve had sleepovers at her house and understand that she expects them to behave.  They also know that if they behave; they get to have fun.  Their Dad is developing a new routine for them as a family.  He’s still learning how to be a single parent; but it seems to be working.  I prefer to deal in corrective redirection and preventing misbehavior.

Teaching them how to behave 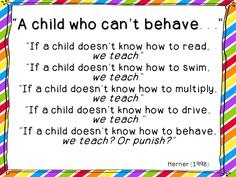 Sometimes the boys’ act out a little and need a little corrective redirection.  Basically, I have them tell me what happened and what they need to do differently next time.  We also have basic rules that they know to follow.  (Holding our hands as we cross the street or staying with us in a store.)  For the most severe misbehavior, I prefer to use time out, taking away TV or wii time.  Luckily, that doesn’t happen often.  More often, I am often able to reward them to get the results I need.  (Yes,  I’m not beyond a little bribery to get things done.)  For example, it cost me $6 to get them to put up the toys in the playroom ($3 each to the two oldest).  And today, it was three pieces of candy to pick up the family room and move all the toys back to the playroom.  Their Pops just shakes his head and laughs when it works (and it usually works).  I remind him that we already had “On the job” training with our son and daughter.   It didn’t take us long to realize that spankings usually hurt us worse than the kids and that grounding a teen was really grounding yourself.    If I can redirect our grandsons’  toward appropriate behavior or use preventive reminders when we go somewhere things seems to go much better.

Let’s be positive, too.

Somedays, though, it seems that we are saying “Don’t do that!”,  “Stop picking on your brother!” or “Be a little quieter, please!” more than we are saying “Way to go!”.   This week I’ve tried hard to find good things to say to each boy several times a day.  I believe the “Rubber Band Method” is important for all children.   Even during the roughest of days, they need to hear something good.  There are several versions; but they all remind us that in the chaos of everyday life kids need to hear about the good things  too.  (Two Words, Rubber Band Method) 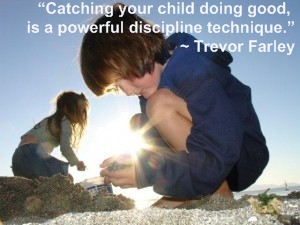 During my first years as an educator, I started using a technique called  “Catch them Being Good”.  I gave out stickers for good behavior or filled a jar with marbles for a class reward.  I used a form of this throughout my education career — yes even when I was at the high school level.  I realized a few weeks ago that my rewarding our grandsons for appropriate behavior is just another version of “Catch them Being Good”.  I think that’s a good thing!

Do you use positive reinforcement with your children and/or grandchildren?  Do you think it makes disciplining them easier?

These are some  of my favorite posters.  I think we all need to have a copies posted in a visible place as a reminder that kids (actually everyone) needs to hear good things, too. 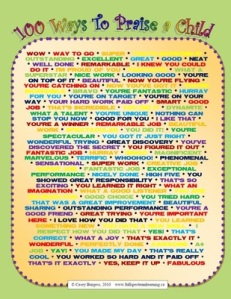